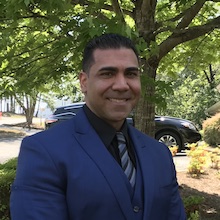 Angel Gonzalez
A Matter of Faith and Time
Student: Doctor of Chiropractic
May 2018

“I knew how Chiropractic helped me, and I wanted to help others in the same way … helping people overcome their struggles and get better.”

And that is why Angel Gonzalez decided to come to Life University to become a Doctor of Chiropractic. Gonzalez has devoted his life to helping others in any way that he can. He already holds a bachelor’s degree in physical education, worked as a certified massage therapist for 15 years, provided mental health assistance as a recreational therapist in a mental health facility and has been a personal trainer off and on for many years. Improving both the mind and body has always been of the utmost importance to Gonzalez, but as he puts it, “I felt that I could still do something more.”

Gonzalez says that he first experienced the power of Chiropractic at 19 when someone accidentally pushed him from behind and he landed quite hard on the floor. The result was that he could not walk correctly for about six months. He says that he did not know anything about Chiropractic at the time, but his father took him to see a chiropractor. At his very first visit, “The doctor did massage therapy and an adjustment, and all of a sudden, I was able to walk correctly and do everything I used to again! I couldn’t believe it.”

Many years later, Gonzalez suffered from another fall; this one from 16 feet. As a result, he fractured his ankle in several places and was told that he needed surgery, which he did not want. He says that he thought that the procedure would not ease the pain that he was sure he would feel for the rest of his life. Instead, he decided to treat his ankle with physical therapy, chiropractic care and massage therapy, and in three months, he started walking again. When x-rays were taken again, they showed that his ankle had healed quite a lot. It still took Gonzalez about a year to fully recuperate, during which he prayed that if he gained full use of his ankle, he would go back to school to pursue something that could help others … Chiropractic. He healed and is now making good on his promise.

Gonzalez adds, “I sold everything, my house, my car, just everything. It was a leap of faith, but I did it, and I’m here. It’s incredible how your faith to overcome difficulties makes you a better person.”

When looking for a school that met his needs, Gonzalez says that he visited several, but did not feel engaged or any positive energy during his visits. That is, until he visited Life University. He attended a recruiting event in his native Puerto Rico and was invited to attend a LIFE Leadership Weekend – about which he says, “It was awesome! There was something about it that made me feel that I wanted to be here. Everything just seemed to line up all of a sudden at that point.”

Gonzalez reflects on his decision to attend LIFE, “At 43 years old, I’m very proud of myself because I never thought that I would go back to school again. I tell people, ‘never give up on your dreams.’ It’s never too late because it’s really all a matter of faith and time. Faith and time – it’ll get you to where you want to be.”

Gonzalez says that another reason he decided on LIFE is that it will better prepare you for your health science career than will other universities. He says that the way that you learn the science behind the treatment is amazing, but the way that philosophy is intertwined in all of the classes is what is truly inspiring. He adds, “I would even encourage students to visit other universities to make comparisons, because I know that they will be back.”

Upon graduation, Gonzalez plans to return to Puerto Rico. He knows that it may be a challenge to take Chiropractic to some parts of his country, but he says that this is a universal problem because there simply is not enough available education on its benefits. He says, “With the ability to help so many, I think that every single doctor that graduates from here has to plant their own chiropractic ‘seed’ out there and nurture its growth to help teach people about how important it is.”

Gonzalez also offers a bit of advice to individuals considering a chiropractic degree when he says, “Don’t be afraid to fail because sometimes from a bad thing, good things can come. Like for me, when I broke my ankle and was feeling desperate, I sought chiropractic care and that led to me coming here and becoming a chiropractor myself. I’m grateful to Life University for providing me with this life-changing opportunity.”