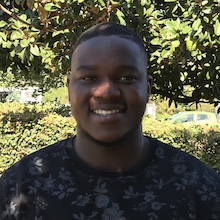 From early-in-the-morning rugby practice to afternoon business classes, each day Brian Muntanga divides his time between his two interests.

Muntanga, an undergraduate Business Administration major, also holds the position of hooker on Life University’s rugby team. He is one of the team’s forwards who, during scrums, plays in the front row to ‘hook’ the ball back with his foot.

Also, a skilled linguist who speaks four languages (English, Tonga, Shona, Ndebele), Muntanga, from the Tonga tribe, hails from Bulawayo, Zimbabwe. He says that prior to coming to LIFE, back home he basically spent all of his time at Falcon College, the boys-only boarding school that he attended since he was fifteen years old. Being approximately 30 miles away from home, he was only able to see his family every three months or so. And while playing rugby since he was twelve years old, he notes, “When I wasn’t in school, I was on tour with the national rugby team called Zimbabwe Schools Rugby. And I really enjoyed that because I got to see a lot of new places.”

Regarding his other interest, Muntanga says that when he was home from school, he would help his father in his business, which produces detergents and lubricants for industrial and institutional use. “I made sure that shipments and supplies were well organized and helped with anything else that I could. My mom also has her own business – a small clothing shop in town. The fact that they each run their own business was a big factor in me choosing to study business. Growing up watching them, I knew that I wanted to do that as well.”

So, after completing high school, Muntanga started looking for a school where he could get his business degree. In the process of doing so, he also sent out his rugby highlight reel, and Life University’s Coach Colton Cariaga responded to Muntanga. “He told me that he liked what he saw, and we started communicating regularly. The next thing I know, I’m here in the U.S. at LIFE!”

Muntanga says that the campus atmosphere here reminds him of Falcon College’s more intimate atmosphere. “LIFE is also a small university that makes me feel welcome – not out of place at all. It’s very diverse and open, so I have had no problem fitting in here.” However, about our Georgia summer weather, he finds it quite hot. He muses, “I tell people that it’s hotter here than in Zimbabwe, and they don’t believe me.”

In addition to attending class and playing on the rugby team, Muntanga also serves as Vice President of the Campus Activities Board (a student group that plans and facilitates events here at LIFE). He notes that it is important to create activities outside of the classroom so that students can have a fun outlet away from studying and also so they can meet their fellow students.

With all of these responsibilities, it does not leave Muntanga with much free time, so he says that he mostly ‘hangs out’ with his fellow rugby players. But then again, rugby does play a large part in his life since he attended Falcon College on a rugby scholarship and is now attending LIFE on one. Muntanga even notes that while he did consider another school, Arkansas State, after he saw LIFE’s rugby results compared to theirs, he decided to come here. He says emphatically, “I’m going to go to the winning school!”

Muntanga realizes that a career in rugby is not a long-term option due to how hard it can be on the body. He says that while he would love to be a professional rugby player, even if he did so, he would still retire at 30 or 35 years old and focus on putting his business education to use. As a matter of fact, after graduating from LIFE, he would like to pursue an MBA and stay in the United States and pursue a sales career, just the way his father started his own career.

As Muntanga reflects on his time here, he says, “LIFE is so great. The people here are very open, and I think that has to be one of the school’s best qualities. If you need anything, someone will be there to help. Plus, it’s a place where you can freely speak with your instructors on a more personal basis since the classes are smaller here than at a huge university.”

Someone far from his home and family, Muntanga would like to make special note of the Life University Rugby team, about which he says, “… without whom I wouldn’t be here. Thank you for the support and friendship!”