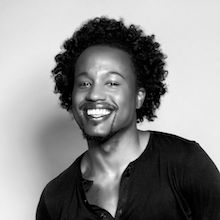 Darrien Drummond knew that he was destined to work in the field of psychology in one form or another. What he did not plan on was his interest in Chiropractic. He says, “It literally came out of nowhere!”

From Savageville, Virginia, and now at LIFE, Drummond is studying to become a Doctor of Chiropractic and also recently entered the Master’s in Positive Psychology – Coaching Track program. Drummond had previously obtained a Bachelor’s degree in Communications Studies from Longwood University in Farmville, Virginia.

After obtaining his degree, he remembers about that time, “I was working just to pay off some bills, and one day, I was at home wondering what my next step would be, and Chiropractic came to my mind. It was out of the blue, so I Googled it and realized that it was everything that I’m interested in all put into one profession. It’s who I am and what I believe – the body being able to heal itself.”

Drummond says that, for some reason, he always wanted to live in Georgia, and when he saw that Life University was located in Georgia, he took it as a sign that he should research the University. He says that when he read about LIFE’s philosophy and listened to some of Dr. Riekeman’s talks, he felt that they really spoke to him in a way that other schools did not. “So, that very night I signed up for a LIFE Leadership Weekend and also applied to the school … and I started here in October 2014.”

While he first became interested in psychology in high school, Drummond did not pursue an education in the subject until coming to LIFE for his chiropractic degree. He says that when he got here and saw there was a positive psychology program, he realized that it was meant to be and seized the opportunity to pursue both paths.

Drummond feels that he relates to both of these fields so well because he has always wanted to help people express themselves, while also living up to their fullest potential … and that is LIFE’s philosophy as well. “I think that Chiropractic is the whole package. In other words, I think it’s the culmination of the connection of the mind and body. For positive psychology, it’s something that allows me to go deeper into the mindset of the patient, while also using Chiropractic to incorporate those thoughts into a whole-body, holistic health approach.” He says that together, these two fields encompass who he is and what he loves to do. He plans to take these two fields and mesh them together but is not exactly sure yet how he will accomplish this. “It will be up to me to figure that out, and I think I will be amazed at how well it will turn out.”

Drummond says that when he first got to LIFE, he was impressed with its vitalistic view of health care, but he was “truly blown away” by how Lasting Purpose resonated with him. He notes that there was a similar philosophy at Longwood University where there were two groups on campus – the “Princeps” and the “Chai” – that represented the spirit of the university, which was to give to others, to serve them and not oneself and to lead and serve, respectively. He says that he feels here at LIFE, Lasting Purpose helps to ground him and allows him to focus on what he loves.

While Drummond’s family is very supportive of his choice of profession, they are still amazed at just how much the educational process has changed him for the better. He says that he has also inspired his siblings to improve and grow in their lives as well. He notes, “They all see how passionate and happy I am now about Chiropractic. My brother even got adjusted recently and said, ‘I can’t believe that people can live their whole lives and not experience this!’”

Even though Drummond says that he loves the fact that he will be a doctor one day, what means the most to him is that he will be a teacher as well. He adds, “To be able to guide and teach people how to live healthier, happier lives and give them the tools and resources to be able to do so, makes me so happy. Plus, I feel that this is exactly where my positive psychology education can really come into play.”

When reflecting on what he would say to prospective students, Drummond advises, “Be clear on your intention and purpose as to why you’re coming to LIFE and what you’re here to study. Always keep that in the back of your mind because when you have those clearly defined intentions, it helps to remind you of your purpose, not only here at the University, but also in your life outside of school. Keep it in mind at all times, but especially as you go through your difficult exams, because it will always be there to inspire you and remind you of why you’re here.”