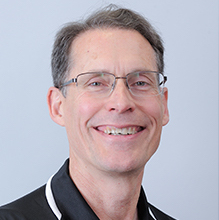 To say that Dr. Keith G. Rau stays busy would be an understatement. As associate professor in Life University’s Sport Health Science Department, and as the Director of Sports Chiropractic for the department of Athletic Care within the Athletic Department, Rau is on the move all day – even carrying his lunch with him to eat when he finds a spare moment.

Even before deciding to teach at LIFE, Rau stayed busy with a full-time chiropractic practice for about twelve years in Roswell and Marietta, Georgia. He says that while he very much enjoyed his practice, he did not always enjoy the business side of the practice. “I thought that I might like to teach since I was teaching Sunday School at my church and enjoyed it so much. I thought that I had a knack for it, so I decided to look for a teaching position and joined LIFE in 1994. It seemed like a good fit. I got hired, and the rest is history.”

Rau, who was born in New Orleans, Louisiana and grew up in St. Louis, Missouri, thought when he was a boy that he might follow in the footsteps of French undersea explorer Jacques Cousteau. “However, I had asthma and allergy problems at the time, so that wasn’t my path after all,” he says with a chuckle. Later, as a sophomore in high school, a friend suggested that he go to a chiropractor for the treatment of his ailments, and he immediately started seeing the benefits from it.

So, when he was in high school and deciding what path he would take in his life, he took a trip to LIFE and also went to a Dynamic Essentials meeting in the ballroom of the Peachtree Plaza to learn more about Chiropractic. Dynamic Essentials was started by LIFE’s first president, Dr. Sid Williams, his wife Dr. Nell Williams and their longtime friend and colleague Dr. D.D. Humber to help other chiropractors develop the skill and capacity to enjoy the success they were experiencing.

About his trip, Rau recalls, “When I visited as a high school senior, the campus was just one building and probably not even the whole building!” Even then, he was thinking that he wanted to attend LIFE, but after the Dynamic Essentials meeting and campus visit, it “sealed the deal,” as he says.

He notes, “Another part of my decision-making process to become a chiropractor was influenced by the progress that I made with my own chiropractor. Plus, I had a doctor who, if he saw someone with even an inkling of interest in the profession, would encourage them to pursue it – which he did with me.”

Rau, like so many other LIFE alumni, not only knows and respects LIFE’s Lasting Purpose, but lives it on a daily basis. “The idea ‘To Give, To Do, To Love, To Serve’ is to me, as a Christian, what you just did, so that was my mindset already. You just do things because they should get done, and because it’s the right thing to do – and not to look for a reward. I feel that you ‘do the right thing, and the reward will come,’ and it’s not something that you talk about as much as you demonstrate.”

Currently, Rau is teaching several classes on upper and lower extremity treatment for sports injuries that are required for a Master’s of Sport Health Science, as well as an undergraduate course. He says about it, “Originally, Dr. Rob Scott was teaching the class, and I then took it over from Dr. David Koch. I’m actually a bit awed by the fact that I’m following in their steps.”

As a matter of fact, a student who attended the class sent him an email recently and said that it had really prepared him for his upcoming LIFE studies, and Rau comments, “It was very gratifying since I had hoped it would be a good preparation. I had fourteen students in class that quarter, and probably six to eight of them were second and third generation chiropractors, but that email proved to me that this class helped them all put a ‘LIFE perspective’ on the chiropractic program’s expected outcomes.”

To prospective chiropractic students, Rau would say, “I think that this is an exciting time because of all the failures in the allopathic medical system that are coming to the forefront now.” With that said, Rau believes that more and more people are becoming interested in alternatives to traditional medicine and that this will push them toward Chiropractic – and with more demand, should come more students of Chiropractic.

With that idea in mind, and with Rau’s focus on athletics, he also says, “When I know that someone wants to be a sports chiropractor, then there’s no place better in the profession than LIFE. We’re the only college of chiropractic that also has intercollegiate athletics onsite – nobody else has NAIA or NCAA teams, and I have the privilege of overseeing the students who provide care to our athletes. They get to learn things hands-on right here with our student athletes, and that’s really amazing. Frankly, otherwise it is a fantastic chiropractic college, but if you have a particular interest in sports, then I know that nobody else is doing what we’re doing here at LIFE.”