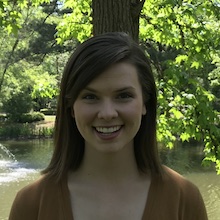 “My life has taken many turns for me to get to where I am now,” exclaims third quarter chiropractic student, Kallie Corbin. Corbin, originally from Portland, Oregon, received a psychology degree while also playing as a Division 1 volleyball player in college. She was the school’s first D1 All-American volleyball player, which then allowed her to go into coaching right out of college. Next, she said that she needed a break from volleyball, so she pursued a new path – “I made an easy transition from coaching to education.” And for the last five years, Corbin has been in Texas, where for three years, she taught elementary school and for another two, she taught higher and corporate education courses.

But what actually brought Corbin to Chiropractic? She explains, “What really led me to Chiropractic was related to psychology – 10 years of mental health issues, from depression to anxiety; 15 different medications through my twenties; Five hospitalizations due to medication issues.” However, this was not the direct route to it; nor were Corbin’s epileptic seizures. “When I finally sought out Chiropractic, it was actually due to a symptom caused by a combination of those conditions, which was sciatica.”

During one of her frequent seizures, Corbin fell and hit her head, inducing a concussion that dramatically increased the frequency of her seizures to about three a day. Then, out of the blue, a chiropractic testimonial video popped up on her Facebook account which featured a woman who said that she beat cancer through chiropractic care. The video had been produced by 2013 LIFE alumna Dr. Meier Miller. Corbin adds, “So, I decided to go there and see Dr. Miller. I literally watched that video, called and scheduled a visit for the next morning.”

Of note to Corbin about her first visit was that Dr. Miller did not adjust her right away, instead educating her on Chiropractic first. During her next visit, the doctor did adjust her and by the third visit, Corbin was given the doctor’s “why” she got into Chiropractic herself, and it was because her sister dealt with bipolar disorder. Dr. Miller said that through Chiropractic, and with no medications, it transformed her sister’s life.

Corbin reports that after just one month of chiropractic care, she had no more mental health issues after suffering 10 years with them. She was able to stop taking all of the medications with which she previously had so many issues. She also points out the fact that prior to chiropractic care, she was incapacitated by about 16 seizures a month, but by the fourth month, that number was reduced to four. She says that while the number of seizures from which she suffered is an easily measurable item, how mental health is improved through Chiropractic is another thing entirely.

She makes note that for her, she started noticing a dramatic change in her thoughts. Corbin says that prior to care, she would keep up the outward appearance of positivity, but inwardly she still wanted to isolate herself from the world and just cry. Plus, a lot of her compulsions had suddenly disappeared. “I no longer, out of absolute necessity, needed to avoid stepping on the cracks in the pavement, and there was no anxiety in not doing so … it felt incredible!”

“And that’s when I started talking to Dr. Miller about becoming a chiropractor myself.” Corbin reports that the doctor was very encouraging of her new career interest. As a matter of fact, Corbin lived only about 10 minutes away from Parker University in Dallas, Texas, so she decided to go there for a visit. Plus, Dr. Miller, being an alumna, also suggested taking a look at Life University.

“When I stepped onto Parker’s campus, I said to myself, ‘Yes, I can do this!’ and then verbally committed to the school. Later that night, my mom and I took a red eye to LIFE, went on a campus tour the next day, and this time I said to myself, ‘No, this is where God really wants me to be.’ I had no question about it.”

After just the campus tour, Corbin says that she loved the beautiful, green campus, but on a deeper level, the philosophy that she learned from Dr. Miller and Maximized Living, was similar to LIFE’s vitalistic philosophy. “It spoke to me and just became a no-brainer for me. And now being here, I know I made the right decision.”

Corbin, with a chuckle, sums up her journey thusly, “If there’s anything that I’ve learned, it’s that whenever I plan something too well, it always surprises me how the opposite happens. I did not anticipate Chiropractic changing my life so immensely, much less seeing myself in chiropractic college as well. I’m just super thankful for ‘life’ – lowercase and uppercase.”