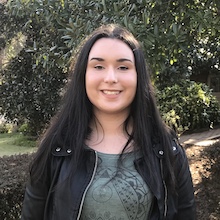 For Liliae Funderburk, a desire to change her eating habits eventually led to her pursuit of a Dietetics degree here at Life University. During Funderburk’s senior year in high school, she felt constantly tired and struggled with weight issues. She says, “I was not eating in a healthy way at all, so I started doing research to see how I could eat to feel better. Once I discovered fresh foods and stopped eating fast food, I started having more energy.”

She says that since she was a dancer who rehearsed during most of her free time, she ate a lot of fast food. Her other favorite, quickly prepared pasta, was also a staple. However, she says that once her new fresh food and raw vegetable diet began, the joint issues that she had been experiencing previously disappeared.

Funderburk remembers, “My friends even noticed a big difference in me, so I helped them make diet plans too. Then my family also asked for my help.” It was then that she realized that she may have come across a way to help others live a healthier life. And once she did some research and came across the dietetics field, her mind was made up. She adds, “I knew that this was what I wanted to do. After all, I was even making diet plans for my family and friends before I even knew what dietetics was! Plus, I saw dietetics as the right path because it promotes food as medicine.”

Since she knew that she wanted to pursue as natural a path as possible, she started doing research to find the right school for her. She says that when she found information about LIFE online, it stood out as an excellent choice since its nutrition program is ranked as one of the top 40 nutrition programs in the U.S. by Public Health Online. She adds, “To be candid, I had applied to a few other schools first, but then I remembered the Lights of LIFE. When I was maybe two or three years old, I remember touring the Lights of LIFE and saw some student dorms on the campus and told my mom that I wanted to go to college here. And look what happened … I actually ended up coming here!”

Funderburk says that both of her parents, being former models, are really excited about her attending LIFE since they are both tremendous fitness and health proponents. Plus, she says that she lived a vitalistic lifestyle growing up because her parents believe that one heals the body oneself. “So, when I considered LIFE, its philosophy really spoke to me.”

After graduation, Funderburk thinks that working for a private clinic for a while will provide her with some real-world experience that will eventually help her to open her own practice. She envisions that practice as one that will not only prepare meal plans for outpatient care, but will teach those patients how to do so on their own for long-lasting health benefits. She sees the practice as part of an overall healthcare clinic with other professionals who would refer patients to her for continued care.

While Funderburk loves to cook, she says that she does not always like to follow a recipe since she loves finding recipes from different parts of the world and then changing them to make them healthier. She explains, “I like to start following a recipe, but then I stop and just make it my own, and that works well for me because I have to be flexible enough to be able to adapt as I move along in my career. That flexibility will serve me well as I encounter and deal with each individual patient’s/client’s nutritional needs and personal preferences.”

Funderburk says that another reason that she decided on LIFE is that after touring a few other campuses, she noticed that they all had a very rushed environment that did not feel personal. However, at LIFE people here say “hello” when out and about and also seem to actually care about you. She adds, “I’ve made friends here that I’ll be friends with for the rest of my life.”

Funderburk continues, “That is not to say that anything about the program is easy though. The work to get the degree may be a lot, but once you realize that you will use these skills for the rest of your career, you come to know the importance of the education that you’re getting and the preparation for a successful career that it provides.”