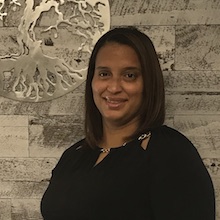 “I want everyone to know that no matter how humble your beginnings are, you can do anything you want to.” Graduating later this year with a Doctor of Chiropractic degree, Marleny Espinosa is a prime example of this adage.

Espinosa adds, “My whole life I knew I wanted to be a doctor, but I was not sure how I would achieve my goal. My mom, siblings and I all sold produce on the streets of my homeland, the Dominican Republic.” It was from these humble beginnings that Espinosa’s drive to succeed was forged. She felt the calling to help her fellow man, and especially its children, in some way. She just needed to find the right path to begin her endeavor.

After migrating to the United States and later graduating with a Bachelor of Science in biology from Georgia Gwinnett College, Espinosa started on her path to achieving her dream. To do so, she applied to both physician’s assistant and chiropractic schools at the same time. She was, as yet, undecided in which way her future lay – traditional or non-traditional medicine.

She reports that she was accepted to both schools – with Life University being the chiropractic school – and took a month off to not only celebrate her success, but also to think about which direction she should go. But during her month off, she became very sick from the throat ailment that had been plaguing her for her whole life.

When Espinosa visited a doctor, she informed her that she did not want to take any of the many antibiotics that had been prescribed for her in the past. She says that she was tired of taking those medications since they did not seem to work, and she decided that she needed to actually figure out what was wrong with her, once and for all. She says, “My doctor really didn’t know what to do with me or how to treat the problem, so she just sent me home with another five prescriptions, but I’m hard-headed and didn’t take any of them.”

Instead, Espinosa asked for a referral to an ear, nose and throat specialist. She told him that she had been taking antibiotics for 24 years and figured that her tonsils, which were probably infected, must need to be removed. He informed her that her tonsils were perfectly healthy and that her problem actually stemmed from allergies and not an infection at all.

Espinosa explains, “That was the ‘ah ha’ moment that I needed to help me decide that Chiropractic was right for me. I decided that I didn’t want to become a physician’s assistant and perhaps ever tell someone, ‘I can’t figure out what’s wrong with you, so take these medications and come back in a week.’ So, I asked myself how I could impact someone’s health, but not do what the doctors had been doing to me for years.”

She says that Chiropractic seemed to ‘find’ her at just the right moment and answered all of her questions. She also says that if she had ever had a doctor that had taken the time to diagnose what was actually wrong with her, then maybe she would not have been prescribed the many antibiotics that she then became immune to due to their overuse. She adds, “We overmedicate and do not look at the root cause of a problem, and that’s just putting a band-aid on the problem.”

In addition to her full-time studies, Espinosa also serves LIFE as a Student Ambassador. She explains, “My new student orientation had such a profound effect on me that it eventually influenced me to become an Ambassador. I’ve never had an individual know me for only a day and yet pour so much into me as my team leader did that day.” So, the very next quarter, Espinosa volunteered to be an orientation leader since she wanted to do for others what her team leader did for her. But she still felt that it was somehow not enough of an effort on her part, so she applied to be a Student Ambassador to give back even more to her school and community.

As an Ambassador, Espinosa has the chance to inform new students of the value of both a LIFE education and the estimable experience to be gained here. Never wanting to steer a prospective student in the wrong direction, however, she makes sure to ask each of them if they have done enough school research. She adds, “I always tell them to make sure that the place they get their education from makes their soul vibrate – that it truly resonates with them – and they won’t know that until they do their research.” She says with a smile that, of course, she is biased since she loves Life University, but she wants students to make their own decisions. She adds, “I want them all to be the best they can be, and I hope that it’s at LIFE because no matter what major they pick, our energies vibrate at the same level because we believe in the same things here.”

Regarding her choice of Chiropractic over traditional medicine, Espinosa says, “Chiropractors have been blessed to use their hands every day to aid in people’s good health. I’m just applying the force, but their bodies are doing the real work. I like to help people realize the potential of a genuinely fulfilling life.”

Espinosa also notes, “LIFE has really lived up to my expectations. Its curriculum stands on its own. If you go into the field and say that you’re a LIFE grad, then that gives you an immediately solid reputation just because it’s such a great school.”