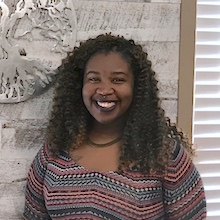 “I visited a couple other schools before choosing Life University, but when I saw that big safety pin and it sunk in what it represented, I knew that LIFE was the place for me.” And that is how Samenna White, nutrition major, made such an important decision about her education when she chose to come to LIFE due to its philosophy about health and nutrition.

While growing up, White said that she never felt healthy since she was obese, and many members of her family were also overweight. However, at age 16 she lost about 80 pounds by eating right and exercising. Once she saw the beneficial result that she had on her body, she, at such a young age, decided that she wanted to study nutrition and do the type of work that benefits others.

Later, when it came time to choose a university where White could gain the knowledge and skills to affect the change that she wanted, she toured a couple of the larger schools in the area – Georgia State and Georgia Southern. Not feeling entirely comfortable on either campus, she went online and found a school that she had never heard of before but thought that she would give a try … Life University.

So, she attended an Eagle Madness and participated in the activities, all the while enjoying herself and becoming more interested in Life University, that is until it came time to take part in the trust fall. She says, “I was so hesitant. I just didn’t want to do it because I wasn’t sure if they’d catch me … but I saw others do it and went ahead and did it. After they caught me, I felt so ‘included’ and started to really feel that I could trust the people here.”

And she says that she is so glad that she did choose LIFE. With a smaller student population attending the nutrition program, she says that she truly feels able to communicate with her professors and fellow students. White also notes that she feels that she can gain more hands-on experience here that will allow her to be recognized for her work, which will translate to being more successful once she starts her career. “I very much want to be a constructive voice for healthier nutrition.”

Plus, she says that she feels that people can truly be themselves here without any judgment. As she puts it, a student can be as involved as they want to be and always know that there are others who share their vision and values.

White says that while she knew at a very young age that her passion lies in nutrition, she was not familiar with the philosophy that backs up LIFE’s classes. She notes that with the help of the faculty and students, that has all changed, and she has made many productive changes to her thinking. She also loves how health conscious a school it is, with the walking trail and café dining options cited as examples.

When White says that she loves to cook, she emphasizes the fact that she truly likes preparing healthy alternatives to traditional recipes. She adds, “Just today, I made spaghetti, but instead of using pasta, I used shaved carrots. Once you put some sauce and a little parmesan cheese on it, it’s still just as delicious!”

About her future career, White says, “I want to work in the community and give back to the community as an encouraging voice for a healthier lifestyle. Plus, I believe that it is through this effort that I can help finally close that safety pin.”