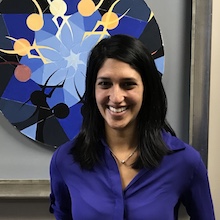 Avital “Tali” Abraham works as the Research and Program Coordinator for Life University’s Center for Compassion, Integrity and Secular Ethics (CCISE). Abraham coordinates all of the programs at the Center, but she also conducts research projects as well, such as the one that is taking place at Lee Arrendale State Prison for Women (LIFE’s Chillon Project).

Abraham, originally from Atlanta, Georgia, graduated from the University of Georgia (UGA) with a Bachelor of Science degree in psychology and cognitive science in 2015. She came to Life University as her first job out of college and at the time did not know a lot about the University or its philosophy. She notes, “However, I knew that I wanted to go the psychology/cognitive science route, and Dr. Michael Karlin told me that this is the direction he wanted to go in by starting the Center for Compassion, Integrity and Secular Ethics.”

Originally, Abraham wanted to be a pediatrician and started her education at UGA with all of the appropriate science classes, but she also took a forensic psychology class as an elective. She adds, “I had just gone abroad, and after seeing several different cultures, my whole perspective shifted. I then realized that I was very interested in how we interact with each other and why we do what we do, and how that has shaped each of us into who we become.”

Pursuing psychiatry might have been considered a natural progression from her original interest in becoming a medical doctor combined with her newly discovered interest in psychology, but she says she never actually considered it. She explains, “I think that it’s a too ‘one size fits all; here’s a pill’ kind of thing.” While she believes that there is a place for its use, she says that she also wanted to look deeper into a person’s history to determine how she could be of help to them – and she did not believe psychiatry would afford her that opportunity.

Proud of her work at CCISE, Abraham explains more about its origins and the work that is accomplished there. She says, “It grew from an Octagon Conference to bring pro-social human values (compassion, integrity, gratitude, forgiveness) to the forefront in the world. So, they created the Center with that in mind – based on secular ethics (science, common sense, common experience) and on some of the Dalai Lama’s teachings.”

She says that their goal is to promote these values in different venues like health care, education, government, prisons – anywhere that can benefit from more “humanity and compassion.” She notes that the Positive Human Development and Social Change degrees (B.A. at Life University and A.S. at Arrendale Prison as part of the Chillon Project), the Chillon Project itself and the Compassionate Integrity Training (CIT) are all products of CCISE.

The Chillon Project, which is an undertaking of the Center together with the Georgia State Department of Corrections (GDC), introduces degree programs in Georgia’s correctional facilities. This is the first degree program to be offered by a college or university based in Georgia, and one of the few such programs in the entire Southeast. Another highly innovative feature of the project is that it includes scholarships for correctional officers employed by GDC to also have access to higher education.

Abraham notes that there is also a research study taking place at the prison that is evaluating the degree program to measure the social, emotional and physical wellbeing of the students as they go through the program and, ultimately, the prison environment itself. She takes measurements every six months with all of the participants in the study and then analyzes the data with Dr. Michael Karlin and Dr. Brendan Ozawa-de Silva to determine the results.

“I’ve also taught a class with Dr. Karlin to the inmate program participants – LIFE’s CIT program,” Abraham says. She also related that she helped Drs. Karlin and Ozawa-de Silva develop the training, from which, she proudly states, an inmate/student who graduated from the program was recently certified as a facilitator.

Regarding the program on the whole, Abraham says that some of the research results have shown that on every measure except for one, the students are performing better as more compassionately capable individuals. The lone exception is conflict, which they believe may be due to the constant close proximity of the students during the classes. She says that they are in class with the same people from 8:00 a.m. to very late at night for four days a week, which means that they do not have any time to take a break and have time away from each other.

It is a curious concept that compassion could be taught, and Abraham had an explanation. She says, “There’s a lot of research that is now showing that through neuroplasticity, you can actually change the brain’s function and structure through sustained practice. Previously, it was thought that the brain grows, then stops growing, remains stagnant for a while and then deteriorates.” She adds that by learning and then practicing the concepts imparted in CIT training, one can actually become more compassionate, and there is now research to back up this concept.

About CIT training, Abraham says that the Center would like for it to be accessed by as many people as possible. She explains that training programs of this caliber are very expensive, but CCISE hopes to keep theirs as inexpensive as possible, or even free.

Abraham, when reflecting on her time here, says that LIFE’s vitalistic approach has influenced a lot of the decisions that she has made both personally and professionally since coming to the University, and it has even changed her future trajectory. She adds, “I think that LIFE has a lot to show the world. I believe that at a university like this, you have a lot of opportunities to do some things that may not be possible at others. Here you have the support behind these programs that you can’t imagine anywhere else.”