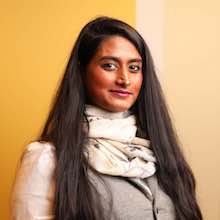 Asma Alhindi, graduate student in clinical nutrition pursuing her master’s degree, is originally from Yanbu, Saudi Arabia. After obtaining an undergraduate in art and design, similar to a home economics degree in the U.S., from Taibi University in Saudi Arabia, Alhindi was ready to pursue a master’s degree in a more challenging subject. She says that her degree consisted of “a little bit of a lot of things,” such as nutrition, art, design, homemaking and psychology. She then struggled with finding a school that would accept her into its master’s program since her degree was so broadly based.

Alhindi says, “So, when I wanted to pursue a master’s degree, most universities said that since I had not specialized, they would not admit me, until one finally did … Life University.”

Alhindi relates a great deal of her cultural background when explaining how very different Saudi Arabia is from the United States. She says that when a young woman graduates from high school, the custom is to get married – which was her family’s goal for her as well. As a matter of fact, she says that females do not even leave the family’s house unless they get married or die, no matter what age they attain.

Being both very religious and very traditional, Alhindi’s father also ascribed to these customs. So, when she informed her father that she had no intention of marrying just yet, he told her that he also would not allow her to attend a school located outside of their home city of Yanbu as she wanted. After researching her options, Alhindi realized that there just were not any majors that interested her at any of the local schools and she had other, greater plans … a scholarship and school abroad.

Alhindi says that the criteria that allow a Saudi citizen eligibility for a scholarship abroad are 1) be a Saudi Arabian national, 2) be no older than 27 years of age and 3) have an average grade up to that point of a B or higher. Since she met the criteria, Alhindi secretly applied for the scholarship and was awarded one. However, when she told her father about it after the fact, he was vehemently opposed to allowing her to go to school abroad.

She also knew that she could not go without his permission either since she says that in the Saudi culture, a female would have to be accompanied and chaperoned by either a husband, brother or father to go abroad, or she would not be allowed to do so. While she and her father continued to debate whether he would allow her to attend school elsewhere, two years passed, and she reached the age of 26. The worry set in that she would lose the scholarship and her opportunity at an education.

Around that time, she even received a message saying that the government would have to replace her with another scholarship recipient if she did not take advantage of it. She became extremely distraught at the thought of losing out on such a life-changing opportunity that when her father saw her crying, he had a long talk with her and her mother and eventually came to the decision to allow her to go abroad for an education. There was just one thing that he had to do first – quit his job and accompany her while she attended school.

Alhindi first attended the University of North Florida in Jacksonville for two years to learn English and prepare herself to attend an American master’s degree program. After graduating in April 2016 from the English language program, she began applying to universities all over the U.S. to secure a spot in a clinical nutrition program. However, none that she applied to accepted her since she had no previous education in the subject. Then it suddenly all came together for her as soon as she applied to and was happily accepted at Life University.

All things did not go smoothly for her once she was here, though, since on her very first day of class in biostatistics, she went home crying because she didn’t know anything about the subject and encountered a language barrier once actually in class.

It was a good thing for her that someone else noticed her struggles and later came to her aid. Alhindi states, “I made a friend from class, Huda Mobarki, who just happened to live in my apartment complex too, who realized that I would get very low scores every week. One day, she texted me and told me to meet her at the pool so that we could study together.”

Since Mobarki had a bachelor’s degree in clinical nutrition, she was able to assist Alhindi and explained a lot of the background information that she was missing. Alhindi says that due to her help, her grades slowly improved, and eventually she made perfect scores on her tests! She adds, “I can tell you that if it were not for Huda, I would not have made it. She’s my best friend now.”

Being away from the Saudi culture, and since her father had to return to Saudi Arabia due to a shorter (than education) visa, Alhindi says that she is truly living her own life and making her own choices now.

Thinking about a freer future, she says, “My goal now is to teach at LIFE after graduation and continue to find my own way in this world.”