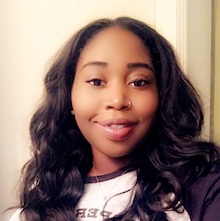 Cyntoria Mason
LIFE Is For You
Student: Doctor of Chiropractic
March 2019

Cyntoria Mason knew that she wanted to make a difference in the world. But would it be in business? Or medicine? Her decision eventually led her to Life University.

From Orlando, Florida and with a bachelor’s degree in Pre-Med Biology from Spelman College in Atlanta, Georgia, Mason’s original plan was, even with a biology degree, to join the field of business. She says she enjoys it very much since not only is her mother a businesswoman, but as Mason puts it, “I just have that kind of brain. It’s orderly and analytical.”

But going into business was eventually ruled out when Mason realized her true calling – Chiropractic. She says, “What I really want to do is help people for the rest of my life. I want to make, and keep, them healthy.”

A deciding factor to pursue Chiropractic is the fact that her family is very involved with sports, with her brothers even playing football and having connections with the NFL. With their involvement with sports, Mason saw many players injured and felt that she needed to be a part of helping them with problems that occurred due to their injuries. She comments, “Now it has become my life’s goal to provide whatever I can to help them in any way I can.”

Mason adds that when her brother, a football player, was given an adjustment several years ago, she went with him and experienced firsthand the difference it made for him. With her interest sparked, she then attended a LIFE Leadership Weekend – the deciding factor that led her to the University. She says, “I knew then and there that this is the place for me. It was an easy decision to make.”

Originally, Mason felt that Chiropractic was “a great profession to be in,” but about starting classes at LIFE, she says, “When I got here, I realized how much it could improve someone’s life by changing their lifestyle to a more holistic one.” Mason goes on to say that she would rather fix a problem before it actually becomes more of one by stepping in with a chiropractic adjustment. She muses, “If I can save somebody 30 steps by taking this one chiropractic step, then that’s exactly what I want to do.”

With a plan to work as an associate for a few years before starting her own practice, Mason wants to give back by employing recent graduates in her own future practice. She says that spreading the word of Chiropractic is also quite important to her since she feels that educating others is beneficial to the profession while gratifying to her. She adds, “I want to bring people along on this ride because it’s really all about the patient and helping them reach their very best.”

Stirring in Mason is also something that sounds a lot like LIFE’s Lasting Purpose. She was raised by a single mother who she says she watched “go through a battlefield,” but just kept on giving to her family and the world around her anyway. She adds, “Now that’s instilled in me too. My mother taught me to work hard and be involved in my community, and I plan to give back just as she did.”

When first arriving at LIFE, Mason says she was a bit closed off and preferred to study alone or in a very small group. However, now she truly enjoys making friends and learning about the paths that led them to the University. She adds that their unique experiences also provide her with the motivation and drive to help others. When asked about the change in her outlook, Mason says, “The community here is unbeatable. I think LIFE does it just so much better than other schools. It really motivated me to change for the better.”

She emphasizes, “If you’re looking for a sense of resource, community and overall understanding of something that is bigger and better than the current medical field, I think LIFE is for you.”