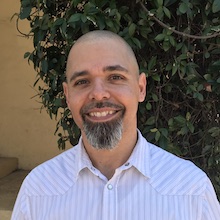 Dr. Jamie Foster
Much More Than a Profession
Alumnus: Doctor of Chiropractic (Class of 2014)
August 2019

By the time Dr. Jamie Foster moved from Allen Park, Michigan to Georgia, he had been down a self-realization road that eventually led him to Chiropractic and Life University. Having attended schooling to become an architect, he found that after two years there it was not the right choice for himself after all. He says that he then sought out what really motivated him and found that it was making art. Moving in that direction, Foster enrolled in an art program at Henry Ford College, but even though he ended up with many credits, did not finish his art degree either. He went through a period of reflection and started a graphic design business, got married and, as he puts it, “I started working at everything under the sun, including the hotel industry.”

He relates that during his time at the hotel, he often checked in a group of very interesting individuals who seemed quite different than anybody else. This group was comprised of chiropractors and chiropractic students who would come to the hotel for their quarterly meeting. Foster says that during one of the group’s visits, he met the leader and was thoroughly impressed by him. He says that up until that point, he had not known anything at all about Chiropractic.

He recounts, “As I was checking in on the group, I found them all to be so uplifting and, as I realize now, exemplified the wonders of Chiropractic and its positive personality.” Coincidentally, at around that very time, Foster’s best friend, Tim, decided to move his entire family and settle in to school to become a chiropractor here at Life University. Foster accompanied him on an informal, self-guided, campus tour, and while he enjoyed the visit, he still did not feel the call to Chiropractic just yet.

Foster says that Tim could see something in him that he had not yet realized, and every time they spoke on the phone, Tim would tell him that he would make an awesome chiropractor. Foster always dismissed his friend’s suggestion because he thought of himself only as an artist, but Tim never gave up watering the ‘chiropractic seed’ that he had planted.

Tim then told him to check out Dr. Adam Rodnick’s chiropractic office to see what it was like. This visit was a turning point for Foster as he realized how Rodnick was radically transforming people’s lives in a way that he had never seen before. He adds, “People were walking in with pain and walking out without any pain at all. Others were relating stories about how, after their adjustments, their kids did not need the inhalers that they had been prescribed to help them breathe.”

After that, he says that he went back to his cubicle at the hotel and again questioned his true purpose – leading him on a yearlong journey to find what it was. He says, “I eventually came to realize that my true purpose was to radically transform people’s lives. So, I started looking at all of my talents as an artist and musician, but I came back to my friend Tim telling me that I would be an amazing chiropractor. In the end, it was Chiropractic for me!”

Next, Foster attended a LIFE Leadership Weekend and says that he was blown away by it and made the decision to attend LIFE right then and there. He notes that he never even looked at any other schools because after that weekend, he knew that there was no point in looking elsewhere since Life University was perfect for him.

Foster currently has one office for his practice, but he plans to greatly expand in the future by franchising through 100% Chiropractic. He says that they have a vision for Chiropractic that most closely mirrors his own.

The expansion of Chiropractic is part of Foster’s vision, and he relates a story about his very first office in Marietta, Georgia. Six months before he even graduated, he had already signed a lease on a space that would eventually become his practice. Being entrepreneurial as well as wanting to help his fellow chiropractors spread Chiropractic, he leased the space to two other, already licensed, doctors. He says that by doing so, he was able to help his colleagues and, in turn, further Chiropractic by assisting more people in obtaining chiropractic care.

“I’ve come to realize, thanks in part to Life University, that Chiropractic is so much more than a profession for me. It’s an entire way of living that encompass all of my passions,” says Foster. He adds that prior to discovering Chiropractic, there had never been anything in his life that he ever felt so passionate about. “I am now not just living, but creating ripples of change in the universe that resonate on a grand scale.”