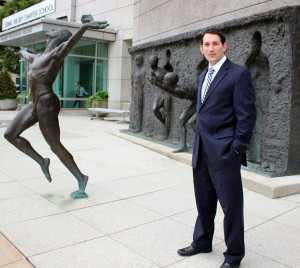 Dr. When Jason Corosanite, D.C., graduated from Life University in 2002, he had plenty of motivation to get into practice soon, as his wife and fellow graduate from the College of Chiropractic, Dana Corosanite, D.C., was seven and a half months pregnant with their first child at the time. Jason, from Philadelphia, Pa., and Dana, from Walled Lake, Michigan, had grand plans to move to Michigan where Dana’s family had chiropractic practices that they could work for while getting their professional and family life started on the right foot. Dana was in fact the twenty-seventh chiropractor in her family upon her graduation and the first female out of that group.

After working in Dana’s father’s office for two years, Jason started his own private practice with Dana in Brighton, Michigan for six years before moving to Philadelphia to attend to his father, who had recently suffered a traumatic spinal cord injury. Jason, who had worked extremely hard to build up his practice into a booming one, was also heavily involved both politically and legally in Michigan, serving on the board of the Michigan Association of Chiropractors and running for office as a chiropractor in Michigan.

“That was just a huge life changer for them and for us,” explains Jason of his father’s injury. “My wife and I decided that we needed to be around my parents at that point in their lives, whatever that meant to us professionally or family-wise. I sold my practice and my house, and we decided to start over in Philadelphia.”

When they started to settle in to their new home, Jason and his wife had every intention of getting back into practice, but they didn’t anticipate the opportunity that was about to present itself.

Years earlier, Jason’s parents, had founded the Philadelphia Performing Arts Charter School (PPACS), which was Pennsylvania’s first grade school with a classical arts program integrated into the curriculum. By the time Jason and Dana moved to Philadelphia in 2009, PPACS had grown to be one of the most successful schools in the city, but his parents’ focus had primarily turned to attending to personal matters.

“The school had grown to be one of the most successful schools in the city, and being very much a visionary, I saw an opportunity to get involved and grow this into a larger organization,” says Jason. “I saw the potential to impact a lot of lives.”

Jason didn’t leave his passion for Chiropractic behind in order to pursue this new endeavor; in fact, his chiropractic principles were very much at the forefront of his mind when developing his vision for an organization of world-class, charter schools focused on developing future generations of creative leaders.

“In daily practice we were always shooting for how we could get more families under care and get connected to schools, coaches and sports teams. And we very much took a vitalistic and holistic approach to health and wellness and impacting as many people as we could.”

With the opportunity to grow his parents’ charter school into a place where he could give kids the opportunities to display their innate potential, Jason’s chiropractic dream had only slightly shifted through the vehicle from which it was being driven. Just a year after moving to Philadelphia, Jason and Dana began planning the creation of String Theory Schools in 2010 and launched it a year later in the summer of 2011.

“The opportunity to not only cast vision into the lives of kids with health and wellness personally, but also professionally for what they might be doing with their careers was a powerful idea to me,” says Jason. “By the time kids are 13-years-old, their value systems are already established, so if we could build not just a school, but a network of schools where we could get kids eating better, working out, taking care of their spine and help direct them into career choices, we couldn’t pass up that opportunity.”

“I came up with the name ‘String Theory Schools.’ It really borrows concepts from the Italian Renaissance where there was a creative explosion in Florence that came together from an intersection of art, science, poetry and philosophy,” Jason explains. It was from the intersection of those respective fields that new ideas were created and formed and society as a whole was elevated. For us, the term ‘string theory’ is a broader concept of a way to bring the arts and sciences together and find a way to bridge creativity and tangible outcomes together.”

String Theory Schools are not only unique in their area, but in the nation as a whole. In the first year of existence for the String Theory High School, it has become one of only 37 Apple Distinguished schools in the country, providing each of its 250 ninth graders with an iPad that serves as their textbook, notebook and anything else that they may need in the classroom or at home. Jason was also named an Apple Distinguished Educator in 2013, recognizing that he is one of the best of the best educators in the world.

“We are developing a mobile-first education philosophy. What we see today is that kids grow up and speak social, where we grew up speaking English,” notes Jason. “They first and primarily consume content and media through a mobile environment. We’re tailoring our education around kids who are creative problem solvers and mobile consumers and creators of information, so the entire curriculum that we develop is mobile first in implementation.”

At String Theory Schools, the emphasis is on content creation rather than fact regurgitation, and their curriculum mirrors that with custom majors that the students choose ranging from digital design and communication arts to vocal, ballet and instrumental majors.

And as one would imagine with Jason’s vitalistic background, the lunch menu at the schools is not your typical pizza, burgers and chicken fingers. Instead, lunch options include paninis, salads and even fish that science majors at the school cultivate in their state-of-the-art aquaponics system, a self-contained ecosystem in which fish and vegetables can be grown for real-world study.

“Life University actually helped us work on our health curriculum for our high school in ninth grade to take the national standards for high school health and make them more vitalistic,” Jason explains.

One way to see just how successful String Theory Schools have been is in its popularity in Philadelphia. The String Theory High School implemented a lottery system in which only 245 lucky students were chosen from nearly 3,000 applicants from all across the city. They now have a waiting list of over 5,000 students.

However, Philadelphia is just the beginning for String Theory Schools, as plans to expand nationally are in the works. They are applying for a charter school in middle Georgia this year that would open in the fall of 2015 and look to expand further afterward.

“Dr. Sid used to say that we need chiropractors in every profession […] as lawyers, educators and even more fields to deliver and disseminate the value system of Lasting Purpose,” Jason says, remembering the values instilled during his time at LIFE.

Not only is Jason following that principle, he’s excelling at it, showing that LIFE is a hotbed for thought leaders in every avenue of life.