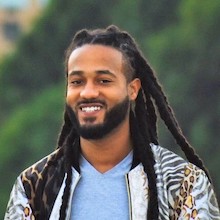 “Something really cool about Chiropractic is that you can personalize it however you want,” says Life University alumnus Dr. Kevin Kinney. After graduating in 2017, Kinney started a somewhat nontraditional practice since he knew that he did not want to “do the regular office thing.” With a background in the entertainment industry, he wanted to continue to work with artists and entertainers in some fashion, and he also knew that he did not want a brick and mortar office where he would feel tied down. While he says that remaining entirely mobile has changed a bit due to the “crazy Atlanta traffic,” he still travels quite a bit to remain active in his community.

While at LIFE, Kinney served as a Student Ambassador for two and a half years and was very active on campus. He says being involved with his fellow students was important to him since, while he was thinking about his own future after graduation, he wanted them to do so as well. He says, “I was really trying to open my classmates’ eyes and show them the various routes that they could take. I think the biggest reason for that is that so many of them didn’t know what they wanted to do, so it was really important for me to help empower them.”

After obtaining an undergraduate degree in Health Sciences from the University of Central Florida in Orlando, Kinney taught for almost two years in an elementary school. He says that while he considered physical therapy as a career option, he did not pursue it after all and decided to teach for a while instead – eventually realizing that this was also not the right path for him which led him to start researching graduate schools.

While he had never been to a chiropractor before and it didn’t really seem like a route that he really wanted to pursue, when someone mentioned Life University as a school he should check out, he decided to go ahead and attend a LIFE Leadership Weekend. When he learned that Chiropractic refrained from the use of drugs and surgery, his thought was, “Okay, wow, that’s cool.” Then throughout the weekend, he found out more about Chiropractic’s and LIFE’s philosophies and says, “Once I knew about that, I was convinced. Removing interferences to allow the body to heal and maintain itself is the way I live my own life, so I was on board.” He says he made up his mind that weekend and came to LIFE in the fall of that year.

And once he was in school, he says that he was able to discover his “purpose.” While he knew that he did not want to see a huge number of patients in his practice every week, preferring instead to spend more quality time with each, his true purpose was to elevate his community – and especially do so for people of color in the community.

Kinney feels that people sometimes wait too long to seek help for an ailment, and he wants to help them be more proactive rather than reactionary. His goal is to change their health and wellness from a sick care model to a preventive, selfcare one.

He says that figuring out different ways to accomplish his goal is crucial. The events that he attends and the way that he practices all tie back to finding ways to elevate the community by engaging people and enticing them to want to know more. Once engaged, he works with them to remove interferences through Chiropractic that could otherwise cloud their creativity and “best lives.”

He says, “Whether I’m working with a performing artist, or any kind of creative artist, by removing their interferences, they can use their innate to create content at their highest level. Those who are then influenced or empowered by that content are going to be elevated to live their best lives. Our whole ecosystem is then elevated, and it goes on and on in a ripple effect.”

Kinney feels that by accomplishing this goal, he will be making an impact that leaves a legacy that expands far beyond himself. He says, “When your purpose has been awakened, it helps keep you motivated to pursue your passion and encourage others to find theirs.”

Kinney says that during his time as a Student Ambassador, encouraging others to find their purpose and passion at Life University was significant to him since it was here that his own environment and the conversations he took part in changed for the better. “My conversations became about purpose and passion, so I really want others to consider those things and think about the big picture, and they can do that at LIFE.”