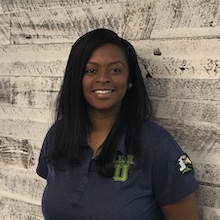 After starting her Doctor of Chiropractic program in January 2018, Ebony Keitt realized something very important – “there’s something very different – in a good way – about Life University.”

Equipped with a degree in exercise and sports science from the University of North Carolina, Keitt was then ready to start her education in occupational therapy – training daily living activities like picking up a spoon or dressing oneself to those with a work injury or disability. Keitt recalls, “I tried a program, but the school wasn’t the right fit, so I dropped it. At the time, I felt really stuck and didn’t know what I wanted to do.”

Plus, she says, she really needed to find a job. She explains that she would have taken a job pretty much anywhere and accepted a position at a chiropractic office working as a chiropractic assistant – something she knew nothing about. Little did she know at the time that what she intended to be a short-term job “on the way” to a “real career” would actually turn into her “real career.”

“I saw the way Chiropractic changed lives, and I wanted to be a part of it. I found my passion.”

As Keitt continued to work as a chiropractic assistant, she became more determined to pursue Chiropractic, but had to find a school to attend. She said that she considered Sherman at that time since that is where the doctor for whom she was working went to school. However, her life changed, as life often does, and she found herself back in the Charlotte, North Carolina area not pursuing her passion after all.

But after realizing that she definitely was not where she was meant to be, Keitt repeated a few steps and again found a chiropractic assistant position, but with Dr. John Ballas this time. It was there that she became reenergized, cemented her chiropractic decision and made the leap to decide on a school – Life University.

“I just said to myself, ‘I’m going to be a doctor.’ Then a couple months later, I attended a LIFE Leadership Weekend, and I was sold! I never even toured my other choice, Sherman, because I simply didn’t need to.”

Keitt recounts that after working in a few chiropractic offices over the years, she has seen firsthand the amazing changes that have come about as a result of Chiropractic – another reason for her career switch. She remembers a patient who came into the office who was in so much pain that she was confined to a wheelchair. Yet, after just one adjustment, she was well enough to actually walk out on her own. Keitt says, “There’s just something about the body being able to take the adjustment that we give it and heal itself that’s just beyond amazing.”

After a year of chiropractic education here at LIFE, Keitt enthusiastically declares that Chiropractic and LIFE have been the best decisions that she has ever made. She says that while she has met some great people and had amazing experiences, what she is most excited about is finally learning about what she has been so passionate about for a long while.

As for her family, Keitt says that they have all been extremely supportive and have even taken to saying, “Hey, Doc!” when they see her now. She adds that they have also witnessed many positive changes in her life and outlook. She reports that she is still trying to get all of her family under care, but there are a few holdouts. As she puts it, “You can tell people about Chiropractic, but they need to experience it for themselves to truly understand it … but once they do, they love it!”

Keitt also notes that she finds LIFE’s Lasting Purpose to be quite similar to the Golden Rule that she was taught from a very young age. She says, “To Give, To Do, To Love, To Serve; that’s everything to me. Everything comes back to you. I may need help one day, so to have given it previously means that hopefully it will come back to me.”

Through reflection, Keitt now thinks that getting away from Chiropractic for a while allowed her to gain even more perspective and determination to eventually follow through with her dreams. She also thanks Dr. Ballas for sharing his passion with her. It was at his practice that she reignited her own chiropractic ‘flame’ when she witnessed how, through his care, his patients were changed so much for the better. “I knew that he could help them because I saw it every day. And now I want to help make that change for others.”