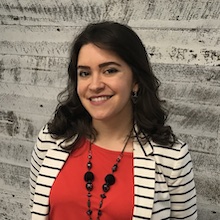 “A recruiter from Life University came to my school, Florida Atlantic University, and offered those who were interested a trip to Atlanta for a LIFE Leadership Weekend. I’ve always loved traveling, and since I’d never been to Atlanta, I took him up on his offer and came for a visit. But once I got here and experienced LIFE for myself, I realized that it was everything that I had been searching for!”

And it was through this experience that chiropractic student Elisa Velez became familiar with what LIFE is all about.

From Medellin, Colombia, Velez originally had aspirations of pursuing a medical career and becoming a pediatrician. However, while her intent was to help, the way that the medical field “helped” was not the way that she felt was right for her.

After graduating with a bachelor’s degree in neuroscience, Velez says that she was unsure if she wanted to start her chiropractic education right away, so she went to Canada for two years where she obtained a master’s degree in business from Concordia University in Montreal. While there, she had a realization that “there wasn’t anything out there” that resonated with her more than Chiropractic, so she completed her degree and returned to LIFE.

She says, “I’ve always had a very holistic approach to medicine, and I’ve never really taken medications. I was so grateful that I found Life University since it will allow me to work with kids in a much more natural and meaningful way.”

Velez relates an interesting story about her first experience with Chiropractic that seems to be very different from most, as it is not entirely positive. She says that she had been in a terrible auto accident where her car rolled over four times, but nothing serious happened to her. She did see a chiropractor for adjustments and says he and the adjustments that he provided were “awesome,” but it was the office’s exorbitant pricing structure that left her feeling poorly about the whole situation. She adds, “So, I had a bad preconception of it at the time, but it eventually had a good effect on me since it made me even more resolved to change those misconceptions of Chiropractic brought about by a very few bad apples.”

Also a member of the World Congress of Chiropractic Students (WCCS), Velez says that she had the pleasure of meeting and talking to students from about 27 other chiropractic schools at a recent WCCS event. Her good feelings about LIFE were reinforced as she was able to compare the University to the other schools represented. She reports that it was eye-opening that only about four schools out of the 27 in WCCS are vitalistic, and their students have extremely limited exposure to the vast array of chiropractic techniques that Life University offers. She adds, “I realized just how lucky we are to be at Life University where we get a perfect blend of philosophy and mechanistic techniques.”

Velez goes on to say that WCCS is an amazing organization to be a part of since it allows chiropractic students to become abundantly involved with the future of their profession, make lifelong friendships and experience what the true state of Chiropractic is around the globe. She adds that it is a wonderful environment in which to see people from completely different backgrounds and philosophies come together and work as one, as they strive to make everyone’s voice heard.

“And about my school, I feel LIFE changes people for the better,” Velez says, “and the person who starts school here is not the same person who finishes here.” She adds that she is very grateful to be at LIFE since its environment provides students with so many resources that they would not usually have access to or even know about. She says without the tools, clubs, seminars and guest speakers, she feels that she would not have learned half of the things that she learned at LIFE not only about Chiropractic, but about herself as well.

On that note, Velez says that she feels Life University would be a great place for those who want to get the full picture of Chiropractic and also be the best possible versions of themselves.