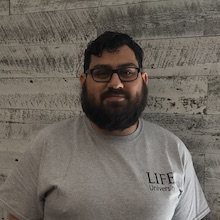 “As a result of my mission to Chile, I came back to the U.S. with a determination to heal.” And now, Esteban Diaz is well on his way to achieving his goal. Currently studying Exercise Science, he will move forward into the Doctor of Chiropractic program in the fall.

Born in Quilpue, Chile, but most recently living in Miami, Florida, Diaz became familiar with the vast need for Chiropractic in Chile through a mission trip. The trip gave him not only a greater understanding of the world, but an understanding of his purpose as well.

“I went on a church mission to Chile and when I was there, I saw so many people who really need chiropractic help. I want to use my knowledge to educate them about diet and exercise and especially that there is no need to use drugs to mask the symptoms of their ailments,” Diaz explains.

As soon as he returned to the U.S., Diaz went back to his chiropractor to alleviate some of the stress that his body had been under after such a taxing trip. While there, he related the details of his trip to the doctor, who then told him about the body’s innate. Things were starting to click for him who, at that time, had only seen web development and gaming as his future career path.

So, upon his doctor’s suggestion, he attended a LIFE Leadership Weekend, about which he says, “Again, it just clicked for me, as it did on my mission and at my chiropractor’s office. I realized that I had truly found my purpose.” He says that he then did everything possible to attend LIFE. He notes that he was even offered a full-ride scholarship at another school for web design, but once LIFE accepted his application, LIFE is where he was happy to go.

“I want to be able to help the body heal through Chiropractic. Once I got to LIFE, it just felt right. I chose exercise science as my major since it’s a smart choice to be able to learn about the body before getting into the D.C. program,” says Diaz.

Diaz has learned a great deal about how to help the body heal itself. He explains, “It’s the body’s innate. It brings about the power to heal and function in such a perfect way.” He questions why, if someone is able to make such synergy as exists between the body and Chiropractic come to life, then “why wouldn’t you want to share that with the world?” He says that it would be so unfair of him to keep it a secret. “Chiropractic is so awesome and it’s the reason why I’m functioning so well right now, so why not give that gift to everyone else?”

Diaz mentions that once he moves to Chile and opens chiropractic offices there, he would like to help change the dynamic of its health system from reactive to preventive. Plus, he speaks about a very significant objective for Chiropractic of increasing its ranks when he says, “When I’m in the community, if I come across someone who wants to be a chiropractor, I’ll tell them to go to LIFE and then come back to Chile and open an office. There’s such a need for well-educated chiropractors in the world, and especially in Chile, that they need to come to LIFE.”

Speaking of LIFE, Diaz says that he thinks the University is one that truly helps people. He feels that LIFE can change so much about its students for the better. He adds, “It molds you into a better individual to serve your community. It pushes you to find your purpose and see that anything is possible in your future.”