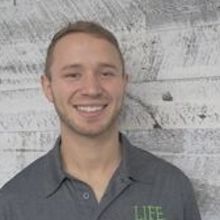 “I always planned to become a chiropractor,” states Doctor of Chiropractic student Kain Queck. From Fontanelle, Iowa, Queck holds an undergraduate degree in Biology from the University of Northern Iowa. He says that he originally decided to attend school there since it offered a dual-enrollment program with Palmer College of Chiropractic, but after speaking with several practicing chiropractors, they all referred him to Life University for his chiropractic studies. He notes that those referrals were due to attendance at seminars at LIFE where they heard Dr. Riekeman’s and the University’s uniquely powerful vision to expand Chiropractic to the entire world.

Armed with the knowledge of what he wanted to pursue, Queck then had to find a way to do so. He says, “So, I took part in a Work-Study program with my local chiropractor during high school and fell in love with it right away!” Interestingly, he adds that he was already living a healthy, vitalistic lifestyle where he ate well and never took medication. Even his parents would tell him to “take a Tylenol” when he had a headache, but he would continually reject that suggestion knowing that his body would overcome it soon enough.

“When I went to a chiropractor for the first time, and they explained the holistic, vitalistic philosophy and lifestyle, it fit perfectly with the way that I was already living. I believe in self-healing completely. It’s my ‘innate.’”

When Queck first began his education at LIFE, he says that he was only focused on his classes and lost some of the “vision” about why he was here. However, it was then that he started becoming involved with campus organizations like Student LIFEforce (SLF) and the Ripple Effect. He adds that since beginning these endeavors, his fulfillment level has gone way beyond his expectations, while also remaining focused on his commitment to becoming the best chiropractor possible.

Queck’s involvement with Student LIFEforce started during his second quarter at the University when one of his friends, Spencer Surmont, who is also on the Executive Team for SLF, invited him to a weekly SLF meeting. He explains that SLF is a continuation of the LIFEforce Tribe organization – a group of doctors and other chiropractic advocates who want to spread Chiropractic and a chiropractic education to the entire world.

He states that one of the SLF objectives is to go into the community to represent Life University and help LIFEforce doctors hold Student Recruitment Events (SREs) to bring more students to LIFE and grow the chiropractic profession. Queck loves spreading the chiropractic message this way and says that when he got involved with SLF, its mission very much resonated with him because he believes that everybody deserves to be under chiropractic care, or at the very least, have access to it.

Queck says emphatically that he will also become a LIFEforce doctor after graduation since he wants to continue his mission of spreading Chiropractic to the entire planet. He adds, “It’s very important to me that students do make that transition from Student LIFEforce to LIFEforce member since there are so many benefits that come with being a Tribe member, not the least of which is the amazing relationship building that stems from membership.” He says that one would be able to practice their communication skills, become involved with their community and act as a representative for Life University, all from LIFEforce Tribe involvement, while also helping grow the Tribe to further the chiropractic profession. Queck reiterates that this is very important since it will help ensure the health and growth of principled Chiropractic to the entire planet. He wants to spread the word and get as many people in the Tribe as possible, and the transition from student to doctor is another step in that direction.

While being a member of SLF does require a commitment to ensure that all of its members are maintaining their academic responsibilities, Queck says that along with that commitment comes the benefits of involvement – building relationships with other chiropractors, the ability to practice one’s community involvement and communication skills and plenty of practice telling one’s own chiropractic story. He feels very strongly about having one’s own story at the ready as he senses that what a lot of patients like to hear is why Chiropractic is so meaningful to the doctor himself/herself.

Queck says that being academically responsible and maintaining involvement with important organizations like Student LIFEforce is “a lot of hard work, but the rewards are endless!”