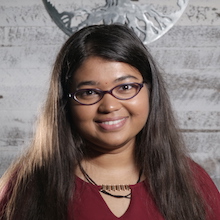 And that is how Richaben Patel, at LIFE obtaining her Bachelor of Science degree in Biology, was first introduced to the University. Originally from India, Patel notes that her mother was a nurse there and later motivated her to seek a career path that would help people’s bodies, minds and souls. She adds, “She really helped me become who I am today. She’s my role model, and I look up to her.”

After graduating from Kennesaw Mountain High School, Patel planned to attend Kennesaw State University, but said that she just did not feel the connection there that she was looking for. She explains, “I wanted to start off at a smaller university that allows me to make better connections in a beautiful setting – and I found all of that at LIFE.”

She says that after making that ‘right turn,’ she checked out LIFE.edu, and that led her to a YouTube channel where she saw amazing videos of the campus and the people. She followed up her online research with an academic tour and truly fell in love with the campus, about which she said, “I knew that this is the right place for me. I felt that people were like a family here.”

Patel states that when she first came to LIFE she did not necessarily plan to continue on to the D.C. program, but now she may do just that. Her plan, after obtaining her biology degree, was to attend medical school to become a pediatrician, but now she says the chiropractic route is also very inviting. She adds, “And if I do choose Chiropractic, Life University is exactly where I’ll go!”

However, Patel says that even if she did become a pediatrician, she believes in using an equal amount of both traditional and non-traditional medical practices. To that end, she says that she would still most certainly work with a chiropractor to give the best treatment possible to her pediatric patients. Also, Patel feels that LIFE is having a great impact on her personal philosophies and says, “In my day-to-day life, I will still take the LIFE philosophy with me no matter where I go because it’s so positive and works for everyone.”

When she first arrived at LIFE, Patel tried to find clubs that spoke to her, so she joined the Campus Activities Board and is now president of the Multicultural Student Association, which helps make students from different cultures feel more at home on campus. About the Association, Patel says, “We have a lot of diversity on campus, so our main purpose is to connect the student body to each other and back to their cultures. Yet, I feel that even without it, Life University has a great culture of inclusion and helping people feel involved. I felt really welcome when I got here.”

Patel also serves as a new student orientation leader here at LIFE. She says that she has enjoyed that role immensely because no matter the age or background of the new student, she sees that they are very motivated to attend the University. Plus, she says that it gives her the opportunity to build connections, get more involved and give back to LIFE. “Giving back to LIFE is something that I really want to do since it has given me so much.”