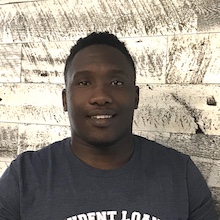 Born into the Karanga tribe in Masvingo, Zimbabwe, Tendai Rioga is an amazing rugby player on our very own Running Eagles rugby team. A self-proclaimed “big guy from a young age,” at the age of nine, he moved from Zimbabwe to Newcastle, KwaZulu-Natal, South Africa and started his lifelong love of the game.

After attending an Afrikaans school in Newcastle, Rioga’s passion for rugby continued as he was able to join the prestigious school’s team and his skill level progressed. But, after high school, he had a choice to make – pursue a career in rugby in South Africa or look for alternative routes to his goal outside of the country. Serendipitously, at that time a recruiting agency called Athletes USA approached him and told him that they could help him go professional outside the country and get an education while he’s at it.

Knowing that a highly physical sport like rugby “cannot be a career forever,” Rioga accepted their offer and allowed them to help him look for universities in the U.S. At the beginning of the search, Rioga was getting offers from several universities, and he also received an email from Scott Lawrence, a coach who assists at Life University. Lawrence said that if Rioga would like to attend LIFE, he would be happy to help him. Rioga says, “I then did my research on LIFE and realized that it is number one ranked in rugby, and I thought it would be great for me, so I applied.” Now, Rioga is here at LIFE pursuing two bachelor’s degrees – Business Administration and Computer Information Management.

Excited to be in the U.S., pursuing an education at LIFE as well as playing his prized game of rugby, Rioga was injured during his first game, which unfortunately cost him the entire season. He laments, “I get here, and my mindset is that I’m going to try to shine as best I can and be a positive impact on the team. And my first game, I tear my Achilles tendon and am out the whole season!” He feels that most people would probably be negative about that situation, but he took it as a blessing since it gave him time to understand the American culture and focus on his studies. He adds that it also allowed him time to earn people’s respect, and not just from sports, but in multiple ways.

While recovering last year, he decided to become a resident assistant (R.A.) at The New Commons. He says that it was an effort on his part to become a positive impact in multiple ways on his fellow students. He explains his decision to do so by saying, “I think the incredible support system I had from my teammates, as well from so many others in spite of the fact that I was injured and could not even play, influenced me to want to give back as much as I could.”

Rioga also knows that despite the fact that he has such passion for rugby, one day “my bones will start getting sore,” so he has to think about a future “after rugby.” And with both parents being professors, they also wanted him to have a degree that would be beneficial to him as well as be something that he could be passionate about. He says that he has always been interested in finance, accounting, the economy and how money works, so he decided that business administration and computer technology were his best options. He adds, “I thought that if I get an education in these two fields, I could go into the corporate world and maybe one day start my own business. I’m very interested in technology and think that Silicon Valley would be a great place to work, or maybe become a stock broker and go into trading.”

This year, after recovering from his injury, Rioga has been playing rugby again with the varsity team and says that it has been an amazing experience because now he is once again doing what he loves. He adds, “And being back in the game allows me to step up even more and proudly get back on that field in my LIFE jersey.”

And as an R.A., Rioga has been able to develop several student events, most recently a block party, that he hopes will become a University housing tradition that will allow him to leave something behind that will make an impact and motivate students for years to come.

With a lot of ambition, pursuing a dual degree, serving as a resident assistant and playing varsity rugby, Rioga gives a lot of time and service to the University. His passion for LIFE and for his own life shine through and make a positive impact every day.