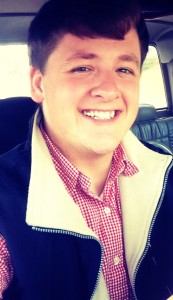 Will Payne
Beyond Prescriptions
Student: Doctor of Chiropractic
July 2015

Will Payne, fifth quarter D.C. student, has had a mercurial relationship with medicine. For one thing, it’s close to home. “My mom and dad are older parents,” he says. “My mom had me when she was 43.” There is an 18-year gap between Payne and his oldest brother, so he is the baby of the family by a long stretch. “Seeing my dad and mom at an older level, taking all these medications, is hard on a kid,” he recalls. His father has had heart issues all of Payne’s life, along with diabetes and high blood pressure; he typically takes 12 pills a day.

Throughout his youth, Payne says his parents would hint that he would make a great doctor. Compassionate and helpful by nature, Payne was quicker to go that route than his mother’s other plan – for him to become a preacher. “I told her, ‘I can’t be that. No way,’” he jokes. Instead, he chose medicine, earning his bachelor of science at Stillman College in Tuscaloose, Alabama before beginning work as a pharmacy technician.

At the pharmacy, Payne was the one doling out pills to the ailing. He worked there for three and a half years, getting ready to take his MCAT and applying to medical school. But as he drew closer to the possibility of becoming a doctor, he began to look closely at his current path. “I realized I was seeing patients constantly taking medication for high blood pressure and headaches, and they’d been taking them for four or five years,” he says. “I asked the pharmacist I was working with at the time, ‘Why aren’t these people seeking other methods to get help?’ and his answer was, ‘I just give them the drugs. That’s all I do.’”

Payne realized that he didn’t want to let his patients get to that point, nor let his interest in their care stop at a filled prescription; he hoped to help people long before pills or surgery were necessary. While researching other fields, one of his fraternity brothers recommended Chiropractic. Payne shadowed a chiropractor and was alleviated of a sinus infection after his first adjustment. When a recruiter spoke about Life University (LIFE) at his college, Payne felt he might’ve found the fork in the road. In the back of his mind, his father’s health pushed him onward, so he enrolled at LIFE to try his hand at Chiropractic. He says, “I wanted to find a way to help people like my dad; my dad is my inspiration for being here.”

Life University has two familiar hallmarks for Payne: it’s in the South (a welcoming atmosphere for an Alabama native, though he’s not as comfortable in Georgia Dawgs territory — “I’m a University of Alabama fan all the way!”), and the small school atmosphere recalls the closeness of high school. “I don’t really know a lot of competitive people here,” he says. “We’re all on the same track now, becoming chiropractors, becoming the best doctors we can be.”

He says the first quarter was a challenge, and he had to commit to studying harder than he ever had before. “My second quarter, when I started doing hands-on work, I really fell in love with what was going on,” he says. He enjoys the tactile approach of Chiropractic and combining his studies to real-life practice.

Two winters ago, Payne faced his biggest challenge yet: his father was hospitalized, and meanwhile Payne had finals to take here in Georgia while his mind was in Alabama with his family. “I failed four classes,” he says. His friends and acquaintances at LIFE could see the stress on his face and were constantly messaging and calling, concerned about Payne and his father. Thankfully, his father recovered, but Payne had a difficult time facing the situation he’d created at school. He was still broken down about his father’s hospitalization and he was now a quarter behind schedule.

“That was probably a turning point,” he says. “At the time, it hurt — but I knew that could happen to anybody. But me giving up at that moment would’ve been it. This is my dream, and I know I’m here to help people like my dad.” He retook the courses he failed and made A’s and B’s in them, grades he’s since kept up. He passes on this advice to all LIFE students going through difficulties: “If you fail classes and you mess up, if you really want this, you can get back up and redo it.”

When he graduates, Payne hopes to open his own practice in Alabama. He dreams of an eventual practice on the Florida coast, preferably right off the beach. Used to the Alabama mainland, Payne is ready for sun and sand. “I try to go as much as I can,” he says. “That’s my peace of mind.”

He knows when he leaves Life University, he will have made connections through class and Student LIFEforce that will last him a lifetime. “It’s a great family environment,” he says, “which is something I believe everyone wants in a school, especially if you’re from out of state. I never felt lonely at this school.”