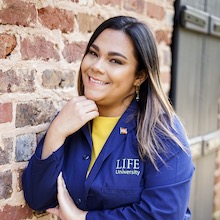 “I wanted to be a doctor or maybe a veterinarian – something in the traditional medical field – but I wasn’t entirely sure what I wanted to do.” This was Yesenia Ostolaza’s sentiment from a very young age. Ever since she can remember, she was intrigued by science and math. Her mother always wanted to nurture Ostolaza’s interests and made sure to find the right schools for her that specialized in those two subjects.

Even as an undergraduate in General Sciences from the University of Puerto Rico in Rio Piedras, she still was unsure of exactly where she would end up in the medical field. As a general sciences major, she says that she was exposed to many different healthcare professions other than just traditional medical doctor. It was then that she first learned about Chiropractic and how drugs can affect the body. About which she says, “So, I started to look into a lot of chiropractic information and asked myself if I really wanted to be a medical doctor after all. I was having some serious doubts.”

Coincidentally, during her chiropractic research phase, Life University visited her school and presented information about LIFE and Chiropractic and offered those interested a chance to attend a LIFE Leadership Weekend. She remembers, “When I attended and heard about Chiropractic and how it helps people, it just wowed me, and I was so impressed. I didn’t even look at any other schools because I fell so in love with Life University. I applied as soon as I could!”

Ostolaza then even started looking for a chiropractor in Puerto Rico to help her with the neck and body pain that she had been experiencing for a long while. Previously, she had been to a physical therapist who was not able to alleviate her pain and laments that nothing ever took the pain away. Then, upon starting her care with a chiropractor, everything changed. She remembers saying to herself that such improvement was amazing and that she wanted to help others in that same manner. She remarks, “I wanted to give my patients a non-traditional medical option, and Chiropractic is perfect for that. I knew that this is what I wanted to do; this is how I wanted to help people.”

On the use of pharmaceuticals, Ostolaza offers a very thoughtful opinion. She says, “I do think that pharmaceuticals do more harm than good, but I don’t think it’s necessarily the pharmaceutical, but the medical profession that causes that harm. They don’t follow up, but simply put the patient on a drug, and that’s it.” She explains that the responsibility lies with the doctor to monitor the patient’s progress on the drug and truly take into account its long-term effects so that its use does not lead to the need to take larger doses or even more drugs to counteract its effects. She mentions a “vicious circle.”

To prove her point, Ostolaza recounts her own mother’s story. With her mother being a Type II diabetic, she was given excessive amounts of insulin as well as another drug that led to liver damage. When Ostolaza arrived at LIFE and learned more about the drug, especially discovering its terrible side effects, she suggested that her mother try chiropractic care for the first time. With diet and lifestyle choices also suggested by the budding chiropractor (Ostolaza), she says that suddenly her mother started improving. As a result, her mother was able to take much less insulin and drop the drug entirely that had been so harsh on her liver. Ostolaza says, “That’s what I want to do for other people who are slaves to pills and especially for those who can’t even afford the medication in the first place.”

Upon graduation, Ostolaza plans to return to Puerto Rico since she feels that it would benefit for more chiropractors. She also notes that she wants to give back in the place where she grew up. She knows that she has learned a tremendous amount at LIFE, and she wants to go back to Puerto Rico to share her knowledge.

However, she acknowledges that overcoming the chiropractic stigma will be a challenge there. And for that, she has a plan – education. She feels that education plays a large part in helping convince people of the advantages of Chiropractic. She notes that facts and statistics change minds, not opinions. She adds, “When I’m in practice, I want to educate my patients by showing them the evidence and explaining the physiology behind it. We lack research in some areas, but we can at least impart what we do know to our patients. Part of our job is to talk to our patients and help them understand what it’s all about.”

Ostolaza also notes another aspect of a chiropractor’s job – love and caring. A patient, she says, needs to know that you “see” and “remember” them to feel how much you care for them. She adds, “I think chiropractors accomplish taking care of the entirety of a person by being truly present with the patient. Plus, with it being such a physical career, I think we send love through our hands.”

Showing some of the love that she espouses, Ostolaza says that Life University is an amazing educational experience. She recommends LIFE wholeheartedly and adds, “To current and future students, take advantage of this opportunity by getting involved at LIFE. Go out and meet people and be engaged in this environment that’s just lovely.”